Just added to your cart

What’s the Difference Between NAD+ and NADH?

Learn What The Difference Is Between NAD+ & NADH, Which One Is Better and Whether You Should Take Them Together.

Both NAD+ and NADH are forms of Nicotinamide Adenine Dinucleotide (NAD).

NADH, often called reduced Nicotinamide Adenine Dinucleotide is made in our bodies from Niacin (Vitamin B3).

It is also increased when we indulge in food and eat more than we should as our bodies have to metabolise the carbohydrates + fats into energy (ATP).

Just like NAD+, NADH is considered a molecule containing the atoms of:

The bond between NAD+ and -H is what creates NADH which is considered the activated carrier molecule.

NADH acts as the transfer of the extra electrons to the inner membrane of the mitochondria and are considered the activated carrier molecule.

Once the electrons are in the inner membrane of the mitochondria, they are donated to a structure called the electron transport chain - NADH acts as an electron donor.

Inside the mitochondrial membrane, the electron transporters shuttle electrons from NADH to molecular oxygen which is an electron acceptor also.

NADH converts back to NAD+ in a reverse reaction and the process of electron transfer is carried out with the movement of protons as H+ ions.

The generation of positive charges from one side of the membrane to the other side activates a protein responsible for generating ATP which is the fuel your cells use.

There will be NAD+ left over which can be used as an electron acceptor when more food enters the system.

NAD+ & NADH are a redox couple which means that one is reduced and the other is oxidised in the redox reaction process.

Which one of them is reduced and which one is oxidised?

To put it simply: NAD+ is simply an oxidised version of NADH.

So, what is the redox reaction we’re speaking of?

What Is Better, NAD+ or NADH? 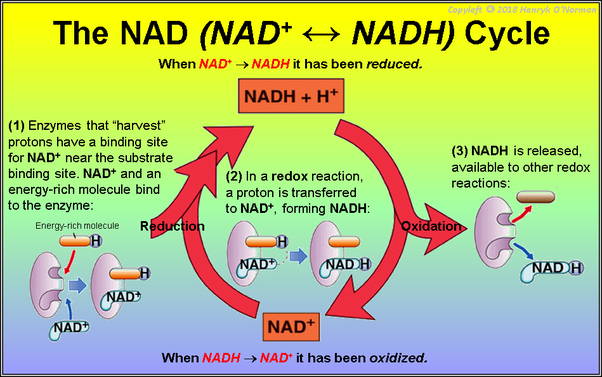 The redox reaction between NAD+ and NADH is essential for the creation of energy in the body via ATP - called cellular respiration.

Cellular respiration is a process of reactions and processes that take place in the cells of organisms to convert chemical energy from oxygen molecules or nutrients to ATP.

When you eat food, your body goes through 3 phases for the food to become energy:

The H+ is used to create energy as ATP which then merges with the electrons + molecule of oxygen to produce water.

The greatest production of ATP happens in the 3rd phase (electron transport chain), but all 3 phases produce ATP.

Not only is NAD+ and NADH used for ATP production, but it is also used to breakdown ethanol from alcoholic drinks.

The enzymes of alcohol dehydrogenase and aldehyde dehydrogenase use NAD+ as an oxidising agent to break ethanol from alcoholic drinks into a less toxic compound called acetate.

The conversion of NAD+ to NADH, and vice versa, are essential reactions in creating ATP during what’s called cellular respiration. The food you consume goes through three phases to become energy: glycolysis, the Krebs Cycle, and the electron transport chain.

The excessive consumption would likely lead to an imbalance in the NAD+ & NADH by decreasing the ratio within the cytoplasm due to the increase in conversion from NAD+ to NADH to oxidise the increase in alcohol.

The Ratio of NAD+ To NADH

There is no known optimal balance of NAD+ to NADH and there is an uneven balance between the two.

Researchers and scientists believe that it is not how much NAD+ in our bodies which determines how healthy we are, but the ratio of NAD+ to NADH.

The ratio between both NAD+ and NADH determines how effectively the cell can produce ATP and that ratio is determined from the body’s requirements which can impact cellular health.

In the cell, the ratio between NAD+ & NADH will vary in certain places which were shown in a study that the NAD+ to NADH ratio varied in the mitochondria & cytoplasm of the liver of mice.

The cytoplasm was depleted under stress whereas the mitochondria protected itself from stressors.

The levels of NAD+ to NADH in the mitochondria will only be compromised when the cells are in extreme distress and the membrane is compromised.

This has led to an increase in the popularity of supplements that act as NAD precursors such as Nicotinamide Riboside (NR) and Nicotinamide Mononucleotide (NMN).

Sirtuins are enzymes which consume NAD+ to function efficiently. However, they are not redox reactions and don’t convert to NADH when they use NAD+; instead, they divide NAD+ to create Nicotinamide.

What Is Better, NAD+ or NADH?

The science is pointing toward NAD+ being the better of the two to use as a supplement; as we age, our NAD+ levels go down and NADH levels go up so there’s the hypothesis that we should supplement with NAD+ instead of NADH.

However, this theory doesn’t account for other studies which show NADH improving cognitive function for example.

How Is NAD+ Reduced To NADH?

NAD+ gains two things when it is converted from NADH:

With electrons being negatively charged, the positively charged NAD+ & H+ cancel each other out to create NADH.