Just added to your cart

PQQ (Pyrroloquinoline Quinone) is an exciting new molecule that was first recognised in 1964 which helps improve mitochondria function, is found in healthy food and also interstellar dust particles (i.e. the stars)!

Japanese scientists announced in 2003 that PQQ was in fact a previously unidentified B vitamin.

A vitamin is a compound that the human body can’t produce itself which carries out at least one essential biochemical function.

However, it still has not been 100% confirmed that PQQ is a vitamin due to the role of PQQ being a coenzyme in bacteria not extending to humans, but it is vitamin-like.

PQQ is a small quinone molecule that has anti-oxidant properties which was once thought to be a vitamin that acts as a redox agent (capable of reducing and oxidising).

Its job is to protect your cells and mitochondria from damaging free radicals and it’s roughly 5,000 times more powerful than Vitamin C in regards to ability to carry out catalytic conversions.

Also, it does a great job in killing off mitochondria which are not functioning and replicating the healthy mitochondria - acting like a cellular regenerator.

PQQ has been shown to modify oxidation in a cell by binding to certain proteins and modulate many of the functions in the signalling process which go on in the cell.

We can see how important PQQ is to mammalian health when it is removed from our diets because low-levels of Pyrroloquinoline Quinone may lead to:

You can see why people have started to become interested in taking PQQ for anti-aging as a supplement.

The following benefits of PQQ are:

A study showed that people who suffered from low energy, felt a significant increase in their energy levels after taking PQQ.[1]

This makes sense as PQQ works on optimising your mitochondria which is the core component of energy.

The study showed an improvement in the ability to learn and improvements in memory function.

As it promotes neurogenesis, the improvement in memory and overall cognitive function would be credible.

A study has shown that PQQ works like an antioxidant - lowering oxidative stress - which is crucial in today’s modern-day living where we are exposed to constant toxins.[4]

Pyrroloquinoline Quinone was also shown to reduce inflammation in the liver and acted as protection against fatty liver.[5]

Pyrroloquinoline Quinone has been shown to prevent the development of damaging proteins that can cause harm to your body.

Many people have believed that mitochondrial biogenesis could only happen from strenuous exercise or extreme calorie restriction.

Researchers found in 2010 that PQQ could protect mitochondria from oxidative damage and also stimulate growth of new mitochondria.[7]

Variations of the levels of Pyrroloquinoline Quinone in diets cause modulation in mitochondrial content.

PQQ also interacts with PGC-1alpha which regulates many of the mitochondrial-related events which regulate genes involved in energy metabolism, blood pressure and also muscle fiber type.

PGC-1alpha is also associated with a reduction in free radicals and acts as a protectant against various mitochondrial toxins.

PQQ has been shown to affect:

Under the right conditions, PQQ can carry out the redox cycle continuously - capable of thousands of redox reactions.

Why is PQQ’s redox capabilities significant?

In comparison with other bioactive quinones such as epicatechin in green tea which tend to self-oxidise (run out of steam) or form polymers such as tannins making them redundant for further redox reactions, PQQ can keep going back for more.

Improving the number of mitochondria and their efficiency in our cells can have far-reaching benefits such as a longer life or better energy.

And it appears that Pyrroloquinoline Quinone plays a significant part in as an essential cofactor in one of the many protein subunits that make up Complex I of the ETC.

This is important to know because nearly all of the endogenous (growing or originating within the organism) free radicals are produced at Complex I.

A study in mice showed that a PQQ-free diet led to impaired reproductive and immune function with the growth of the mice being impaired.[8]

More importantly, PQQ-deficient mice had 30% - 40% fewer mitochondria and the mitochondria they did have was abnormally small or appear to function properly.

Pyrroloquinoline Quinone was shown in early studies to have anti-inflammatory properties.

A study in mice who were given PQQ were shown to have less inflammation in their brain tissue compared to the control group.[9]

There was also a human study of 10 people that lasted 3 days who took PQQ which showed C-reactive protein (CRP) and interleukin-6 (IL-6) levels dropped.[10]

Here are the foods with the highest PQQ content in them (micrograms per kilogram): 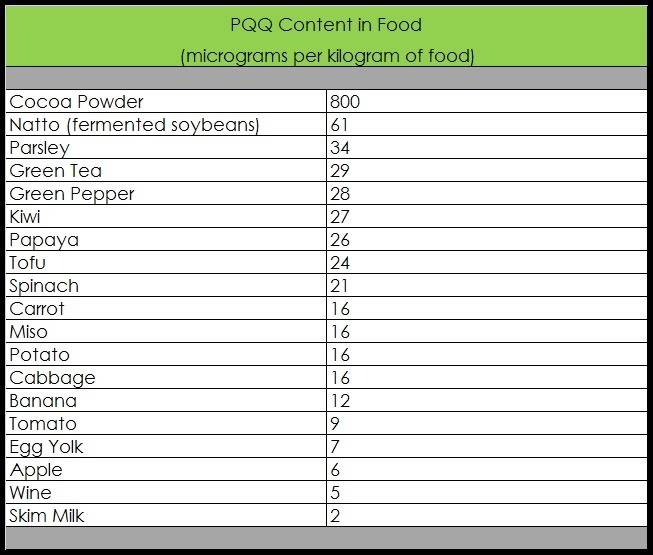 As you will see from the table above, cacao powder has the highest concentration of PQQ out of the all foods below it.

If PQQ leads to mitochondrial biogenesis via the activation of cell signalling molecules such as AMPK which has been purported to up-regulate NAMPT - leading to an increase in NAD+.

This in turn, could activate the sirtuins and lead to an up-regulation of PGC1-alpha which results in an increase of natural mitochondrial biogenesis.

In one study, researchers commented that:

“PQQ treatment caused a concentration-dependent increase in the cellular NAD+ levels, but not the total NAD+ & NADH levels. Our results suggest that PQQ-inducible mitochondrial biogenesis can be attributed to activation of the SIRT1/PGC-1a signalling pathway by enhancing cellular NAD+ formation.”[11]

In other words, PQQ doesn’t increase mitochondrial biogenesis directly, but could be a key factor in the process.

Many people combine both PQQ supplements and CoQ10 to help maintain their energy levels.

A study showed that the combination of Pyrroloquinoline Quinone and CoQ10 may lead to memory enhancement & promote cognitive health + brain function.[12]

The recommended dosage to get health benefits from PQQ are 10mg - 20mg a day.

The clinical studies have shown that 20mg of PQQ a day is needed to experience a cognitive benefit.

You can also look to boost your PQQ intake by increasing your intake of raw cacao.

What Are The Side Effects of PQQ?

As PQQ increases mitochondria, some people have said (anecdotally) that it has caused mild insomnia so you may want to take your PQQ supplements earlier in the day to avoid this.[14]

Other people have noted effects related to the brain such as mild headaches.

There are many promising studies that have been carried out showing PQQ may help as a dietary supplement which is why PQQ is one of the fastest growing supplements right now.

PQQ supplements are certainly one to look out for!

Back to Breakthroughs in Anti-Aging
Use left/right arrows to navigate the slideshow or swipe left/right if using a mobile device
English
★ Judge.me Reviews

Let customers speak for us

I have been using anti aging supplements for almost 20 years , not realy for anti aging skin wise but vital organs . I understand from experience that alot of products are fake and does not reflect what is written on the label but your products are astonishing well prepared and have excellent combination with real well being feeling. Thanks for thinking out of the box in a way that you came up with such products.

Have had nothing but great experiences

It is simply unbelievable how good you feel after just taking two capsules, even after a single dose. My energy level was boosted by this supplement, and I felt the effect right away.
I gave the product to my friends and family members and all of them were amazed at the results and felt the same way as I did.
Also, when I was sick, I increased my dose to two tablets in the morning, and two in the evening, and my condition quickly improved , and I found myself feeling less fatigued as well.